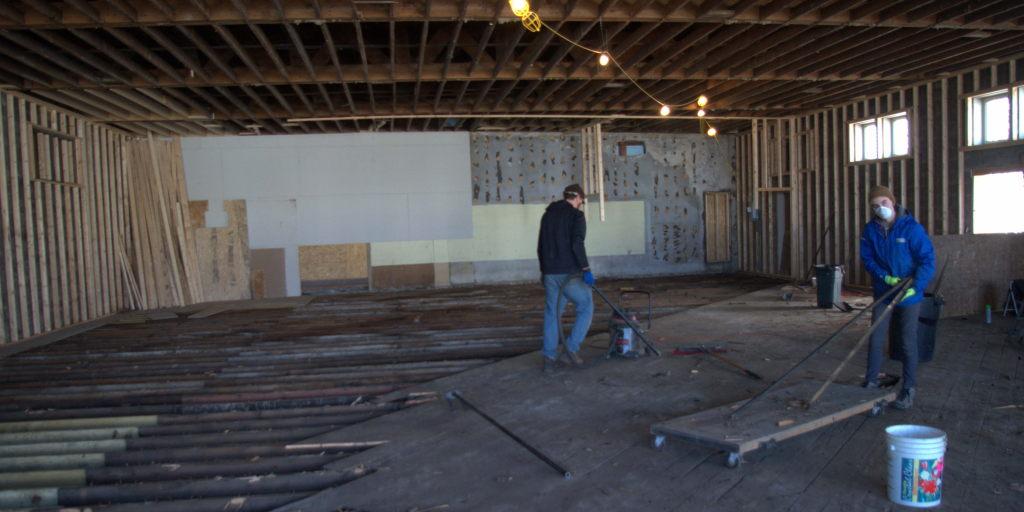 While most storefronts in downtown are closed and dark, 109 Lodi Street–known more commonly as “Ganser’s” or “The Dime Store”–has been seeing a lot of activity lately.

Something New Is Coming

That activity, however, isn’t business–at least not yet.  The properly was recently purchased by Carla Wiessling, owner of Kingfisher Yoga. Along with Stephanie Caves (an Occupational Therapist), Steph Kessenich (a Massage Therapist), and Sarah Keyeski (a mental health practitioner), Carla will be turning the historic building into the Willow Tree Wellness Cooperative.

But Not Quite Yet

While Peter Tonn–the previous owner–did quite a bit of work on the facade, the inside is still in need of major renovations before it’ll be ready for business.

The original maple flooring had to be removed because of warping, and the old-growth pine under-flooring had water damage and signs of mold.  Family and friends have joined in to help Carla remove all this flooring and get the structure ready for professional carpenters and others to come in and rebuild what she refers to as “The Grand Dame”.

Wiessing hopes to have the facility open for business by September.

Own a Piece of Lodi History

Knowing the value of history and sentimentality, Carla is offering the old-growth pine for free for anyone who want some.  She’s selling bundles of the maple flooring  (cut and planed it’s still good for patching or laying short-piece floors).  And… she has what looks to be the original, painted “Ganser’s” sign looking for a home that will appreciate and respect it.